“In this the age of concern over privacy invasion and surveillance and manipulation, people will start to realize that there is no way to avoid being manipulated by other people, governments, marketers, and the like.” 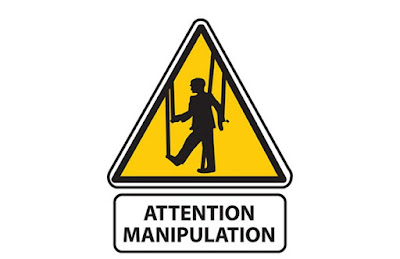 I’m collecting money on behalf of victims of domestic abuse.

Would you like to donate or do you not care about victims of domestic abuse?”

See what I did there?

I’m attempting to control the narrative

I’m trying to tell you that the reason you might choose not to donate is because you don’t care about victims of domestic abuse.

I’m trying to present you with two choices. Hand over money to me, or be branded as someone who has no sympathy towards victims of domestic abuse.

But my attempting to control the “why you didn’t donate” narrative by telling you that a lack of a donation means apathy towards victims of domestic abuse is outright manipulation.

There are many symbolic acts and gestures that can mean a multitude of different things. Occasionally there are people who attempt to publicly control the narrative.

During the Vietnam War, President Nixon announced before Memorial Day that people should hang their American Flags outside their home on Memorial Day to show that they are part of the “Silent Majority” (a Nixon term used to describe non-protesters who were in support of the war in Vietnam).

As my grandfather, a World War II veteran, went to hang his flag outside his home (an act that he would do before all federal holidays), one of his children asked him “But dad, how can you support the war in Vietnam?”.

My grandfather looked his child in the eye and said “That *man* is not taking my flag from me. He doesn’t get to decide what my flag represents.” My grandfather then proceeded to hang his flag outside of his home.

President Nixon had tried to control the narrative. He tried to turn the hanging of the flag into a statement of support.

He wanted people to view all the flags being placed outside as support of his administration and policies.

This manipulation act is continuing today by all people from all across the political spectrum.

People who are trying to control the narrative.

People who are saying that certain symbolic actions mean something that they don’t.

If these people cared about your beliefs they’d ask you to explain yourself before casting judgement. They’d have asked why the flag was being placed outside rather than immediately seeing a flag and criticizing the homeowner for being pro-Nixon as well as being in favor of the war in Vietnam.

Symbols mean different things to different people. Just like I cannot force my views onto others I cannot place my interpretation of symbols onto them.

Yet there are scores of people trying to do exactly that.

It is important to try to gauge how your words and actions will be interpreted by others and to try to choose them carefully.

However, that doesn’t mean that you should allow yourself, your words or your actions to be manipulated.

Let the lesson here be two fold. First one should not assume they know the reason why a person is doing a specific symbolic act. Second, one should realize that by doing a symbolic act they leave themselves wide open to be misunderstood.

Rightly or wrongly, this is the current climate that we are in.