Why Do Victims Get the Blame? 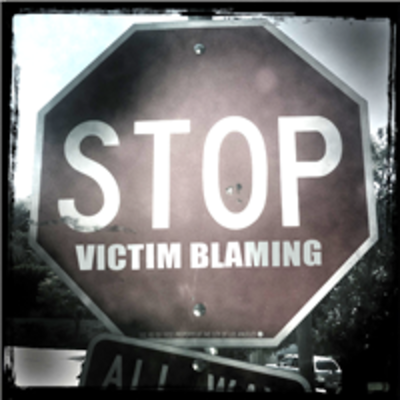 “He deserves it!”
“She had no business being around such people!”
“He should have fought back!”
“He went to a Community College, of course he won’t get hired”
“Serves her right for getting drunk!”

The five statements above are a small percentage of the thousands of different types of victim blaming that occurs daily.

But why? Why are people, even educated and smart people so quick and willing to blame the victim? Why do people do this even when it is of no benefit to themselves?

There are different theories as to why people choose to blame the victim. I would like to discuss one such theory, the findings of Dr. Melvin J. Lerner, known as the Just World Hypothesis.

What is the Just World Hypothesis?
It is the prevalence of the belief in a just world. A just world is one in which actions and conditions have predictable, appropriate consequences. Meaning that people believe that the world is fair, it is just. Good people get good things, bad people get punished.

The hypothesis states that most people have this desire to believe that the world is fair and just.

How did Dr. Lerner Discover this Hypothesis?
Lerner’s original experiments involved women, who were asked to observe what appeared to be learning by punishment. When the learner – actually an actor – gave a wrong answer, she received painful electric shocks. Afterwards, observers were asked to describe how they felt about the victim, how likeable or morally worthy she appeared to be. One group of women that just saw the victim get repeatedly shocked tended to derogate her. But another group, which before being asked to characterize the victim was told that she was not seriously harmed, did not engage in victim-blaming.
Lerner explained these results suggested that seeing innocent people get hurt with no resolution of the situation violated the observers’ sense of the world as just.

How Does This Connect to Victim Blaming?
The connection can be made in 4 steps
1. Person has the belief (possibly an unconscious belief) that the world is fair
2. Person witnesses or hears something that is a threat to that belief (e.g. rape, acquaintance getting fired from work etc.)
3. If person takes this new data and concluded that the world is NOT just, they are now vulnerable. It means they can be a victim.
4. Person therefore blames the victim. The victim was bad. Bad things happen ONLY to bad people. Person also thinks to themselves “I am a good person, these things don’t happen to good people”. Person can also choose to say the victim is a liar as an alternative to blaming the victim. Both accomplish the same goal.

Applying this reasoning suggests that the reason why people choose to blame the victim is due to their own personal safety. Unfortunately, this safety is a mere figment of their imagination. In fact, the perception of being safe when one isn’t can be a detriment, as it leads people to be less cautious, leading to victimization.

I had wondered why, in cases when a student accuses a teacher of abuse, parents of the other children in the class will blame the victim. Logically it just made no sense to me. It is still The Just World Hypothesis but it will apply slightly differently. Parents refuse to believe that their child could have been a victim. Rather than accept the reality that the world is unfair, and that their innocent child could just have easily become the victim, they prefer to perceive the world as fair, they prefer to view their innocent child as being protected, so the only option left is to blame the victim.

Perhaps this idea can be expanded. It still puzzles me that survivors of incest report that when they told a relative about the incest, they the survivor, was blamed. I always believed that this was purely denial. Perhaps this idea of Just World can be applied as well. The Just World idea can be boiled down to the need to know that the world is a safe place for me. If this idea is understood this way, then no place would one need to feel safer than with their family and within their home. Just like a person’s mind has difficulty knowing that the world is neither safe nor just, all the more so their own home and their own family.

Let me be clear. The Just World Hypothesis isn’t the only reason why people behave this way. It also isn’t applicable in every case. Sometimes people do it because they are in denial, sometimes they believe the reality, but they are trying to protect their own good name (e.g. any type of institutional cover-up). I am choosing to write about the Just World Hypothesis to offer a new perspective of understanding.

When I was young I was taught “Never ascribe to malice that which can be adequately explained by ignorance”. Applying this Just World Hypothesis to victim blaming shows that people blame victims not out of malice, but out of an unhealthy defense mechanism.

Yisroel Picker is a Social Worker who lives in Jerusalem. He has a private practice which specializes in working with people of all ages who are looking to improve their awareness and their social skills. He also lectures on the topics of communication and child safety.
You can email Yisroel at yisroel@ympicker.com
Follow Yisroel on Facebook here
Follow Yisroel on LinkedIn here