“One doesn't recognize the really important moments in one's life until it's too late.”
-Agatha Christie 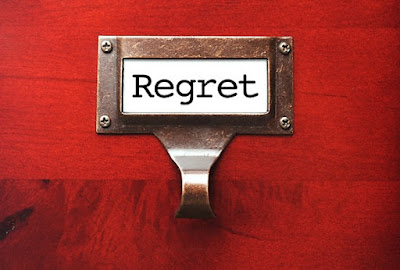 Being the outgoing and open person that I am, I tend to be the type of person who can have a conversation with almost anyone. Many times these conversations are mundane, but sometimes they become deeply philosophical while other times they get personal. A number of years ago, one of my conversations took a very personal turn when someone asked me to name my biggest regret in life. This is a question that I’ve heard before, but it wasn’t a question that I’d ever thought about personally.

I believe that approximately 95% of the people who answer this question give the same basic answers.
-I wish I spend more time with [a friend or relative]
- I wish I told [this person] how I felt about them
- I wish I had/hadn’t married this person
-I wish I went to university

My answer wasn’t in the 95% category, and it is something I still regret to this day. But before I give you my regret, I need to provide a bit of a background.

The year was 1995 and kids all over the globe are using a new internet service known as America Online (a.k.a AOL). The dangers of the internet was not yet known to many parents. I was 14 years old and I was one of these teens on the AOL. I signed up for a Jewish kids e-mail penpal service. I publicly list that I’m a 14 year old Orthodox Jew and that I live in the Flatbush section of Brooklyn. I received a number of responses from kids my age. All of the e-mails seemed okay, but there was an exception.
I got one very odd email (name has been changed due to my memory).
Hello, I’m Chaim. I’m 42 and I live [quite close to you]. If you don’t find it too odd, I’d like to be friends with you…
I ignore the email. Even at 14, I know better than to engage with such a person.

A few months later, I find myself on AOL with a different screen name (AOL wasn’t a fan of people emailing hacking files) and back on the penpal list. Once again, I get an email from Chaim:
Hi, My name is Chaim and I live in Flatbush. I’m 42 and I like having younger friends. If you don’t think it is too creepy to befriend someone my age, I’d like to get to know you better. Perhaps we can get some ice cream.

This time I decided to email Chaim back.
Sorry, but I think it is too creepy.

I never heard from him again. End of story.

So why do I have regret over this incident?

While this story happened over 20 years ago, and while very few people use AOL now, the threat is still the same.

Last summer, an American Airlines employee in California denied boarding to 2 underage girls who were trying to fly to New York to meet a man whom they met online. The employee was afraid that the girls were going to be victims of a sex-trafficking plot. (Article can be seen here) Their parents had no idea, and the girls were naïve enough to believe that they were going to meet someone who was going to give them modeling work.

The first thing that parents need is to have open lines of communication with their children. This is true whether or not the child is allowed to use the internet. Parents need to stress specific cases that, were they to occur, need to be brought to the parents' attention immediately.

Schools also need to take an active role in educating children to the dangers of the internet. If nothing else, it will show the child that it isn’t just their parent being overly cautious. It will also help if the child has a way of reporting online issues, without involving their parent.

I didn’t share the information and it might have cost someone their life. Will your child make the same mistake, or have you  given them the tools, confidence and security that they can share such information?