From Knowledge to Action 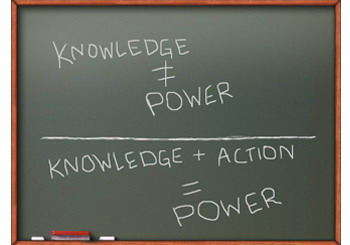 Knowledge is a smoker knowing that smoking cigarettes is very unhealthy.
Execution is a smoker quitting smoking.

The cars of the 1970s and 1980s were constructed a lot differently than the cars of today. Most of these cars were rear wheel drive vehicles, the front tires only being used to direct the car. Due to this setup, drivers were given the following instructions when driving in snow:
Steer into the skid, get your wheels aligned with the direction of the skid, and then turn out of it.

Unfortunately, just because people were taught this, just because this was a piece of knowledge that they knew, doesn't mean that they are able to execute accordingly when the scenario unfolded. Why is that? How could people so easily forget a basic lesson that could be the difference between life and death?

The answer is quite simple. Let’s put ourselves into the driver's seat of this classic car.
We are the driver, we are in control of this car. The car drives when we want it to drive, stops when we want it to stop and it goes in the direction we tell it to go. Now the car goes into a skid. We have lost the control we just had. Feelings of panic kick in. Feelings of helplessness are there too. Add in some anxiety to go along with that sick feeling inside the stomach. The car is skidding left and we need it to go right! Knowledge is telling me to go into the skid, but my intuition is telling me to steer the way I want the car to go!

Knowledge is knowing to steer into the skid, execution is taking the wheel and steering into the skid to regain control. These are two separate things. Obviously one isn't going to properly act without the knowledge, but having the knowledge doesn't mean that one will execute.

There are many reasons for this. One major reason is the failure to internalize the information being learned.
Americans are taught from a very young age to call 911 in an emergency. But how many of us sat and thought about this when we learned it? Teach a child to call 911 in an emergency, then sit there with them and discuss it. Visualize a scenario when they will need to call it. Help the child internalize the lesson, so that they are ready to act and call 911 in an actual emergency. Help them become someone who is able to act, not just someone with knowledge.

The same can be applied to parenting. There are many parents who have the knowledge of what to do, but there are times when they just can’t execute. Let’s illustrate this using sexual abuse as an example:
A child just comes to their parent and reveals that they were abused by someone who the parent knows personally (child in this example can be any age, including an adult). Here is what the parent knows:
· The facts that the child just provided
· Knowledge says that people don’t make up these things
· Knowledge says to speak to the police, and to get help for this child
· Knowledge tells the parent that the child isn't at fault for the abuse
· Knowledge tells the parent that they too might need help coping
But what about the parent’s own emotions?
Possible emotions include:
· Anger towards the perpetrator
· Anger towards the child (note: while one shouldn't be angry at the victim, this is a perfectly normal feeling in many cases)
· Feelings of letting the child down
· The belief that one isn’t a good parent
· Stubbornness / Refusal to believe that the parent was fooled and/or groomed by the perpetrator
· Fears of possible negative responses from peers and members of the community
· Memories from previous personal traumas
These personal emotions from the parent can block the execution of the necessary intervention.

This article is being written in response to my previous article “Shifting Gears” . I received some feedback from people who thought that the article didn't really have any useful information to them. That the general principle of the article was something they've known for quite some time, that different times require different types of intervention. My message wasn't clear enough in the previous article. One must know when to switch gears, but one must also be able to execute and actually switch them. Knowing that one needs to do something and actually doing it are not the same thing. Learn about yourself. Learn what stops you from executing the knowledge that you've acquired and learn how to hurdle over these roadblocks that stand between you and a successful execution. Learning how and when to properly execute is an important skill that can be applied to all areas of one’s life.

Yisroel Picker is a Social Worker who lives in Jerusalem. He has a private practice which specializes in working with people of all ages who are looking to improve their awareness and their social skills. He also lectures on the topics of communication and child safety.
You can email Yisroel at YMPicker@gmail.com